In the eyes of many, Vladimir Putin is a complete badass.

In Russia, sports are very popular to all ages, but as I have made clear in my previous posts, Russia’s view on popularity is distinct from others. From Formula 1 racing to chess boxing (yes, it really exists), it seems Russian’s desire for adrenaline is unlike all counterparts.

This need for adrenaline seems to be present in Russia’s president, Vladimir Putin as he enjoys hang gliding, sky diving and scuba diving.  Putin has played a major role in the development of sports in Russia. In 2007, Putin made a fully fluent English speech that resulted in a successful bid for Sochi to host the 2014 Winter Olympics.  He aided Russia in earning the right to host the 2018 FIFA World Cup for the first time.  Currently very popular online and through social media, Putin has been seen doing outlandish acts to promote sports and a healthy way of life to Russians.

Unlike the U.S.A. in my opinion, Russia has a greater appreciation for sports outside of the most popular ones (football, basketball, baseball and soccer).  Maybe this is because Putin leads by example.  Putin participates in alpine skiing, formula 1 racing and big game hunting, and at the same time,  people enjoy watching him.  Much like President Obama has been reported playing basketball with the University of North Carolina among other places, Putin competes, just at a more adventurous level.  Recently,

Adorned in white overalls – to resemble a bird – Vladimir Putin spent some of Wednesday leading in a different capacity, heading a flock of crane birds in flight from a hang glider. The stunt already has the Russian blogosphere alight. –RT.com

Such stunts have become a trademark of Vladimir Putin since he first became President in 2000. He once shot a rare tiger with a stun dart before putting a tracking device on him, and two years ago shot a whale with an arrow containing a tracking device from a crossbow. –RT.com 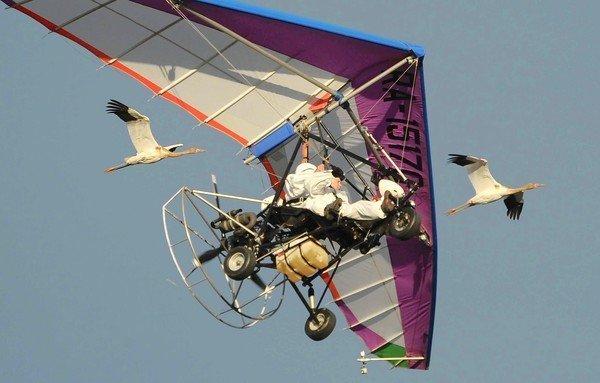 In February 2011, Vladimir Putin promised to learn to skate well enough to play hockey. He started training with Alexei Kasatonov, a famous hockey player, and just two months later Putin was a confident skater. Recently Putin played in an event featuring Russian Legends of hockey against an amattuer team that Putin played with.

You read that correctly. Putin took the ice for an amateur hockey team that was squaring off in an exhibition game against a group of some of Russia’s biggest hockey legends. The match took place literally hours after Putin was sworn in. The fact Putin played in a hockey game might be surprising as is. The fact Putin set up the game-tying goal and scored the game-winning goal in a shootout is remarkable. –Bloguin

At the age of 60, there are backlashes from Putin’s actions on the ice.  Recently reports have surfaced that:

Russia’s sky-diving, wolf-hunting, horseback riding president has suffered a “sports injury,” according to his spokesman, but some Kremlin watchers insist something more serious is afoot. – The Atlantic Wire

The injury is often talked about in the twitter world as well as people are concerned about the health of Putin, and how this lifestyle effects the President.

The fact that Putin leads the charge by playing sports and living a healthy life surely plays a role in the promotion of athletics, but how big of a role is uncertain. I think it would be exciting to see Barrack Obama strap on a helmet and pads and take part in the NFL Pro bowl, but I don’t ever see that happening.  I doubt it would be viewed  highly by Americans if our President was spending time shooting tigers and whales, but I personally would enjoy watching him do it, especially if it would promote young people to go out and be adventurous.