All good beer drinkers (Euro and Yank alike) know, with the crispness of fall comes the excitement of both classic and innovative autumnal beer.

The tradition is the classic pale lager, originating in Munich, Germany.  Pale Lager is a lean, stable beer and is most widely drank as what people consider “regular” beer around the world today.  They tend to be dry, lean, and like Autumn itself, crisp.  Traditionally, during Germany’s biggest fall festival, Oktoberfest, a type of Pale Lager dubbed “Märzen” is the drink of preference and has been since 1818.  Oktoberfestbier is supplied heavily in Germany by what is known as “The Big Six” breweries.  (Spaten, Löwenbräu, Augustiner-Bräu, Hofbräuhaus München, Paulaner, and Hacker-Pschorr. (All conveniently located in Germany’s southern half and beer haven, Bayern)  If you’re looking for your typical, traditional Autumnal beer, look no further.  Each of these breweries offers their own specific versions of Oktoberfestbier and many offer international ordering and shipping. 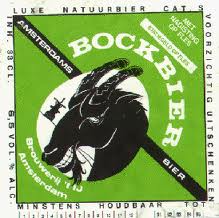 To step up from the pale lager, Fall beers also often come in the form of a Bokbier, or “Bock.”  Bock beers are dark, sweet, lightly hopped, malty ales traditionally associated with holidays and festivals.  In areas like Austria, Bokbier is drank particularly around Christmas time, but places like the Netherlands and Belgium like to get things started off in Fall with strictly seasonal Autumn Bock Beers. Brouwerij ‘t IJ, a brewery in Amsterdam, Netherlands, brews a specialty fall beer called “eco-beer biobok.”  The IJ Bok is, “Dark and Robust, but not too sweet.”  It is available every year from September through November.

Finally, and most typically American, we have the specialty Autumn “flavored” beer.  These beers are generally ales brewed to include typical Fall tastes, such as pumpkin, vanilla, nutmeg, cinnamon, and other thanksgiving-style flavors.  Quite generally, these beers are sweet and full flavor.  In fact, as this next beer exemplifies, they can be a bit of a dessert beer, so to say.  A typical and delicious fall beer brewed in the States is The Bruery’s “Autumn Maple.”  Brewed in Orange County, California, this belgian-style brown ale is reminiscent of the sweetness of Halloween and Thanksgiving combined.  It is a bold and spicy blend of  traditional Belgian yeast strains, sweet potatos, maple syrup, allspice, vanilla, cinnamon, and nutmeg and not only smells, but also tastes uncannily like a pumpkin pie.

One thought on “Fall Brews – From East to West”